To begin my blog I want to say I feel honoured to be undertaking this role for such an inspirational leader of Occupational Therapy. Nick Pollard has been justly nominated to deliver this year’s Elizabeth Casson Memorial Lecture. However it will not be easy to sufficiently encapsulate the content of the lecture in this blog.

I will highlight a number of key messages for you and include some personal reflections. The complete lecture will be available on the RCOT & Conference website to listen at your leisure and as the leading article in next month’s edition of the British Journal of Occupational Therapy.

Nick was nominated to deliver this prestigious lecture by Dr Rebecca Khanna Assistant Dean Faculty Health Well-Being Sheffield Hallam University. During her introduction, Rebecca reminded us that this was the 42nd National Occupational Therapy Conference and of the following advice, that the person delivering the Elizabeth Casson Memorial Lecture “should speak from and to the heart of occupational matters”, that for her this was clearly evident in the wide ranging achievements of Nick Pollard’s work over many years.

Further she recalled coming to know him and of his work in occupational therapy in the late 80’s and early 90’s, particularly that he was “deeply applied” to occupational therapy practice and the narratives of individual people”. His early commitment was far reaching, especially for  service users who were marginalised and challenged by occupational injustice. Rebecca continued to summarise by recounting Nick’s impressive range of texts  including “Occupational Therapy Without Borders”, and his means to promote social inclusion at a local, national and international appeal, whilst also engaging with people and projects at a local level and is an inspiration around the world.

A personal reflection, over many years Nick’s work  has encouraged has inspired me and numerous other occupational therapists, his work is of international acclaim and yet he also gives time and interest to the small and local spirit of occupational therapy, giving this equal credence. This has included opportunity to write a chapter in his book ‘A Political Practice of Occupational Therapy’.

As a visiting lecturer from Sheffield Hallam, Nick came to see a student on practice placement with me, he took great interest in the MACA Group, (Music and Creative Activities) and wholly endorsed our work. He could see immediately what we were doing and the great significance of the power of occupational transformation that he spoke about today. For me Nick has enabled the international and political perspective of Occupational Therapy feel accessible, within reach. This is no mean feat. He is a truly amazing occupational therapist. Elizabeth Casson would have be pretty pleased with his work as he endorses the political philosophy and power of occupation.

Nick began his lecture on a humorous note with a game of Word Bingo and a prestigious prize of a bottle of Henderson’s Relish (Google  this for more detail it is truely famous, revered and treasured in Sheffield), also signed by his colleagues in Sheffield Hallam University, some great names will be on the bottle!

Nick continued to say what a great honour it was to be nominated for this Casson Memorial Lecture and he wanted to begin by thanking the many people in his life who had supported his work. He included Silvia Sans Victoria and her hospitality and friendship, especially for himself and Frank Kronenberg after achieving approval for a publishing contract to begin writing the now acclaimed ‘Occupational Therapy Without Borders’.

Nick reminded us that Elizabeth Casson was a true hero who fought for change, but that she did not do this alone. The need to work together in teams alongside and with other people to create social change.  Nick gave a truly welcome plug to our Human Library work (see RCOT 2018 blog 11). 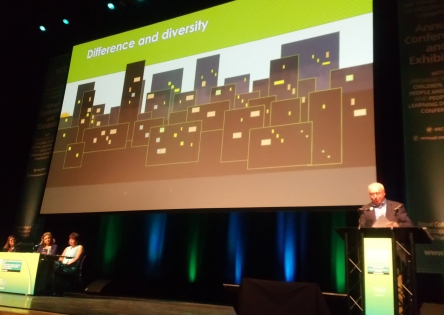 He spoke of the political history of our precious NHS reminding us all of how life was before its inception. Recalling his own family history, stories of health challenges both before and after the NHS came into being and pre-post war politics with pressures for change. Further Nick went on to talk of the current and relentless austerity damage within the NHS with the professions working to cope with what is called ‘Winter Pressure’. The challenges he has seen recorded in students academic assignments in a way not seen before, where the human story is often lost.

A city of occupational therapists – a city itself which is heroic!! To shape thinking and politics of our profession, to build a global city with narratives to involve people in action. Working with consequences of health inequality, reaching out to gain power by sharing power, doing being, becoming and belonging. What is our story?

Nick you are a brilliant man a fantastic occupational therapist, I hope this blog will encourage everyone to find your lecture on-line RCOT 18 conference website and to read your paper in the next edition of British Journal of Occupational Therapy.

Yes there was a winner for the bottle of the famous Henderson Relish!!

This site uses Akismet to reduce spam. Learn how your comment data is processed.

This work is licensed under a Creative Commons Attribution-NonCommercial-ShareAlike 3.0 Unported License.