It was a surprise yesterday, on arriving in Belfast for #RCOT2018 to see women dressed as Suffragettes on the streets of the city. It turns out the date of this year’s conference co-insides with the 100-year anniversary of women getting the vote, and marches were held in capital cities across the UK. This was reported in the national press but busy with my preparations for the conference I was totally unaware. As well as a pleasure to observe it was also a timely reminder of the rights we perhaps nowadays take for granted that were secured for us by feminist movements of the past.

The question of what links can be made between feminism and the occupational therapy profession was the focus of Heather Davidson’s presentation. The session started with the questions ‘What can feminism offer occupational therapy?’ and ‘Why is feminism important to you?’ The audience were asked to contribute their answers live through their mobile devices using software which enabled digital audience participation. The answers were then displayed in a word cloud on the screen; the picture below displays the audience’s answers from today. 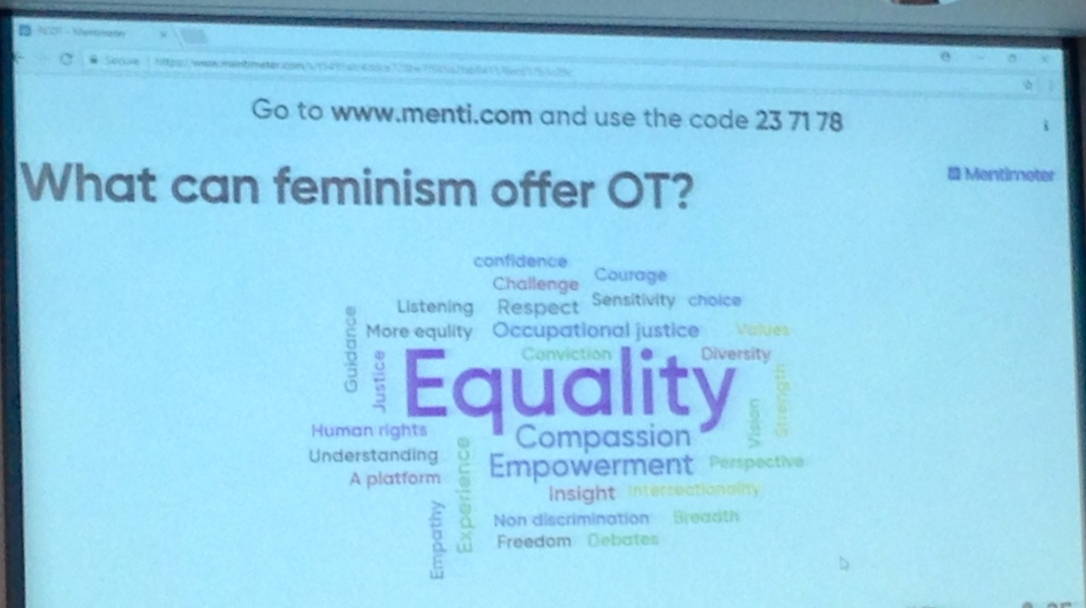 In preparation for this presentation I had already reflected on how feminism is important for me, and the service users I support. I work as an occupational therapist on a community team for adults with intellectual disabilities and I am (sadly) familiar with the disparity between health outcomes for this client group and the general population. What I wasn’t really prepared for was the shocking gender bias in health outcomes illustrated by statistics released by the NHS last year (see https://digital.nhs.uk/data-and-information/publications/statistical/health-and-care-of-people-with-learning-disabilities/health-and-care-of-people-with-learning-disabilities-experimental-statistics-2016-to-2017)

As the seminar progressed the audience were guided through a tour of the ‘waves’ of feminism from the last century, how these relate to the development of occupational therapy, and also how there are many varied (and sometimes contradictory) perspectives on feminism and female power, (for a very contemporaneous example of this type ‘Germaine Greer and Beyoncé’ into Google). Differing schools of feminist ideology were discussed, and the point was highlighted from the audience that men can be and often are, feminist too.  In fact some would argue that anyone who believes in equality between men and women is essentially a feminist.

Herein lies the crux of the discussion in while there are inherent links between occupational therapy philosophy and feminist ideology, such as a fundamental belief in equality and a focus on power dynamics in client centred practice, it was suggested there might be a wider reluctance to connect the label of ‘feminist’ with occupational therapy.

However, statistics in the presentation suggested that the profession is currently 90% women, and occupational therapy students are currently 90% women so matters that affect women’s rights (such as equal pay) are by their nature inherently feminist.

I found it brilliantly refreshing to hear perspectives that position the NHS as essentially a patriarchal system being discussed, even if ones personal views may differ from this it is still exciting to have these ideas raised at the national conference. There was enthusiasm from the audience to continue the discussion further, and the presenter asked for people interested to get in touch, her contact details shared at the end of the presentation are H.Davidson@salford.ac.ukor on twitter at @TheLoft_connect. ‘Loft’ stands for leadership. feminism and occupational therapy  – what’s not to like?

View all posts by lgpersonaldev

This site uses Akismet to reduce spam. Learn how your comment data is processed.

This work is licensed under a Creative Commons Attribution-NonCommercial-ShareAlike 3.0 Unported License.